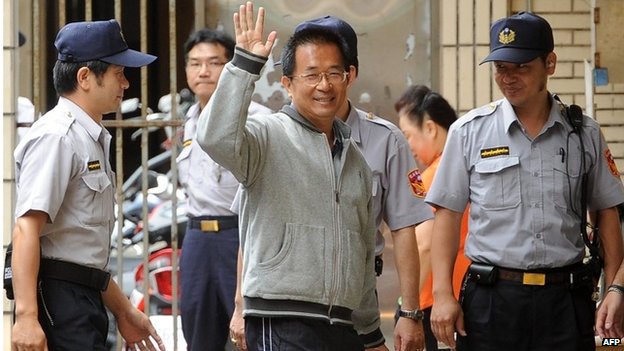 Former Taiwanese president Chen Shui-bian is to be released from prison after being granted one month of medical parole, officials say.
官方表示，前台灣總統陳水扁假釋保外就醫一個月。

Chen, president from 2000-2008, was six years into a 20-year sentence for money laundering and accepting bribes.
阿扁曾擔任2000~2008年的總統，後來因為貪污收賄被判了20年的有期徒刑，目前服刑六年。

The justice ministry said it would decide whether to extend his parole at the end of each month.
法務部表示會在每個月月底評斷是否繼續假釋。

He has accused the current government of political persecution in order to appease Beijing, as it pursues closer ties with China.
而阿扁卻被現在的傾中的政府所迫害。

Chen, a former lawyer, was put on trial shortly after stepping down from his second four-year term in 2008.
阿扁，前律師，在2008年卸任第二任元首時，很快地就被進入司法審判。

He has been suffering from a series of medical conditions, including depression and Parkinson’s disease, and has for some time been asking to be released on medical grounds. Authorities said that last year he attempted suicide.
至今產生多種健康問題，包含憂鬱症、帕金森氏症。甚至傳出去年他想自殺。

Chen’s former vice-president, Annette Lu, has been on hunger strike in an effort to draw attention to his situation.
陳前總統的副手，呂秀蓮，為了阿扁而絕食抗議

She was admitted to hospital on New Year’s Day suffering from symptoms related to her fast.
她後來因為體力不支，在過年期間被送進醫院。

Chen’s expected release was delayed last week after a courier carrying documents relating to his case got stuck in traffic.
阿扁之所以延期釋放是因為公文在路上塞車。

Manage Cookie Consent
To provide the best experiences, we use technologies like cookies to store and/or access device information. Consenting to these technologies will allow us to process data such as browsing behavior or unique IDs on this site. Not consenting or withdrawing consent, may adversely affect certain features and functions.
Manage options Manage services Manage vendors Read more about these purposes
View preferences
{title} {title} {title}